Both my kids have always loved the idea of my horse, Chloe.

They talk about Chloe nonstop at home and we pretty much have the Netflix cartoon Spirit Riding Free on the TV on repeat. As soon as we get to the barn, however, they freeze up around the horses. Ask them if they want to sit on Chloe and they run the other direction. 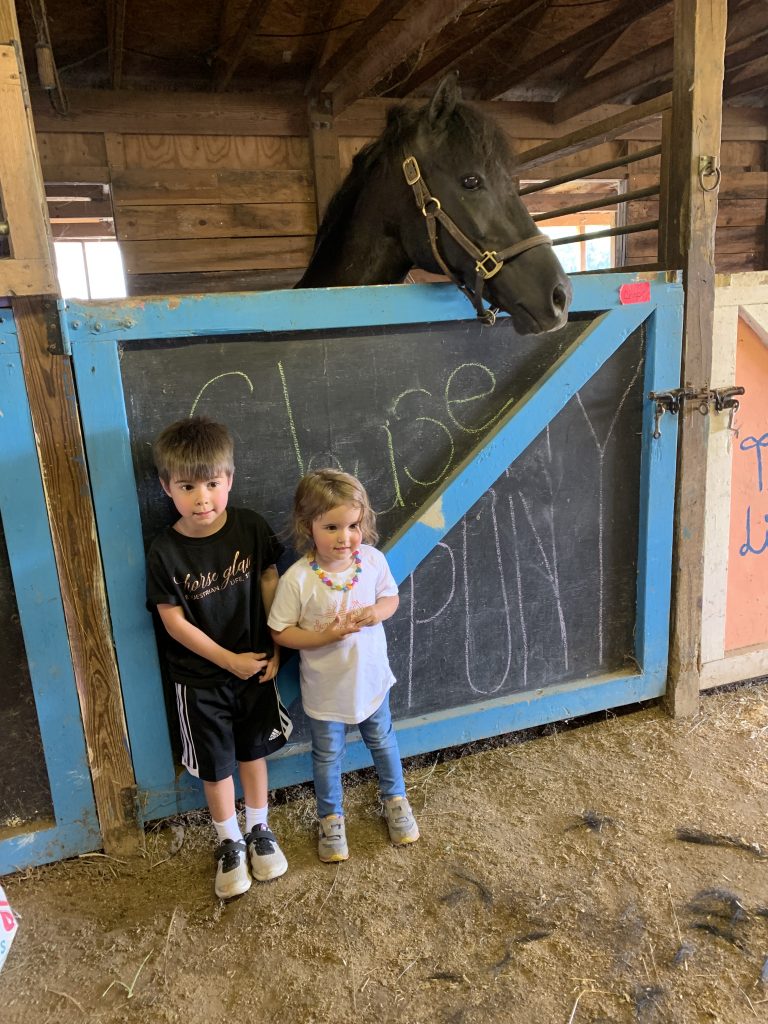 I am not entirely sure what was the catalyst in this change of heart, but one day after my lesson when I was walking Chloe, Logan said she wanted to ride too. We put a helmet on her, she sat on my lap holding the reins and Jackie led us around the barn together. We got in the car and she immediately asked to do it again the next day. Naturally Tanner, not to be outdone by his little sister, wanted to ride next time too. 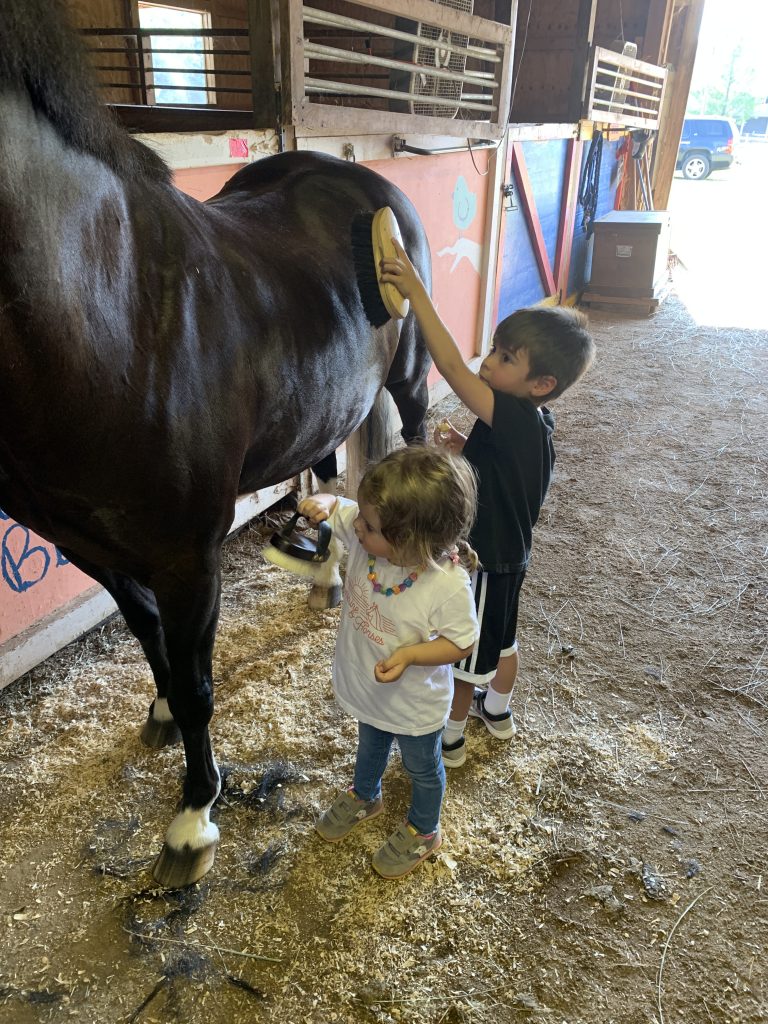 A week later we were at a friend’s barn so that the kids could visit with something a little less intimidating (sorry Chloe): a medium pony named Chase. Chase is adorable and friendly. He is black and white. Logan did shed a tear the night before when I confirmed he wasn’t pink. However, Chase also loves powdered donuts, a fact that made the aforementioned fake tears stop immediately. 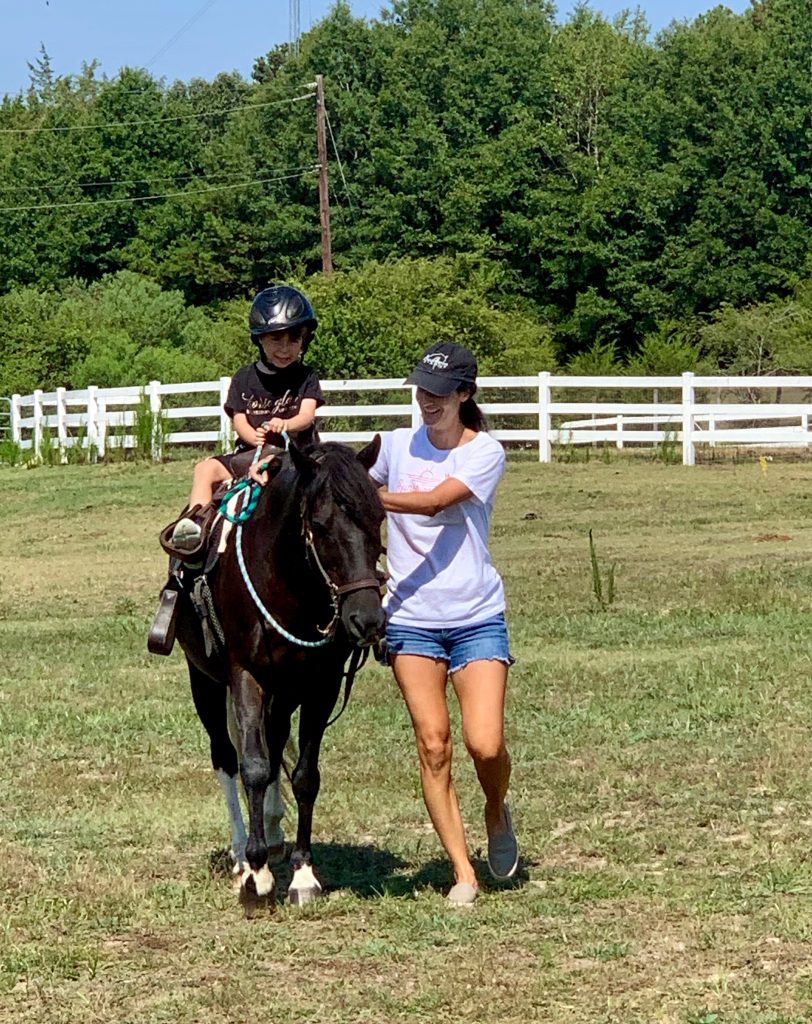 The kids took turns riding Chas lead-line style in the field in the most adorable and comfortable looking small western saddle. Logan took it very seriously, sitting straight and center, holding the reins and concentrating. Tanner, in typical boy style, wanted to go faster. Afterward, they brushed and fed Chase the promised powdered donuts, moving around him with an ease I’ve never seen from them before in regards to horses. Of course it is understandable. To them, Chloe is massive and they only come to her belly. As adults, we forget how imposing horses really are and honestly It was sort of a good reminder for myself that any horse is inherently dangerous. 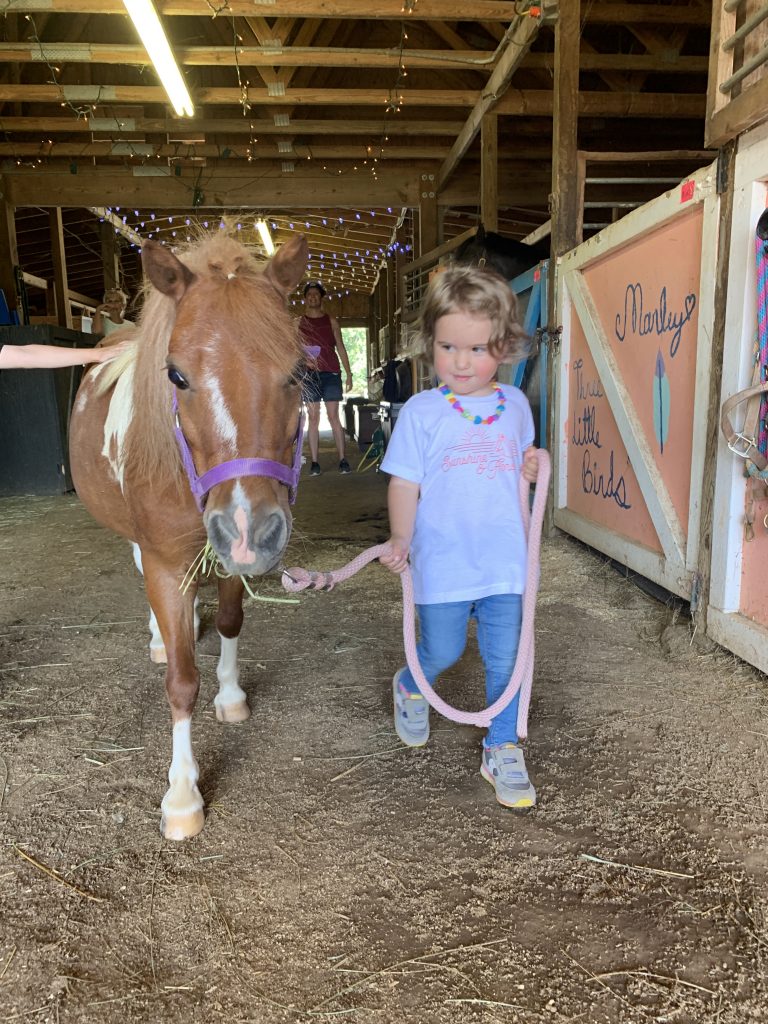 Once Chase was back in his stall, we surprised Logan and Tanner with another barn resident: a miniature paint pony named “Little T”. They both took turns leading him around the barn and grooming him. I thought Logan was going to burst with excitement. The smile on her face when she was holding the lead rope and letting him graze was priceless. I cannot say the same for the pony I see in my near future, though! I think it is safe to say they caught the riding bug! Must be genetic! 🙂
**
Andrea Wise graduated from Wake Forest University School of Law in 2007, where afterwards she spent 7 years as a commercial real-estate attorney.  In 2012, she launched the equestrian company, Pony Glam, which makes and sells the only colored hoof dressing for horses. She is also the voice behind the new equestrian lifestyle blog, Horse Glam. Andrea lives in Charlotte, North Carolina, with her husband, Zach, two young children, cat and horse, Chloe.

Andrea Wise graduated from Wake Forest University School of Law in 2007. Afterward, she spent 7 years as a commercial real-estate attorney. In 2012, she launched the equestrian company, Pony Glam, which makes and sells the only colored hoof dressing for horses. She is also the voice behind the equestrian lifestyle blog, Horse Glam, and equestrian apparel store HerHerdingHabit.com. Andrea lives in Charlotte, North Carolina, with her husband (Zach), two young children, a cat, and a horse (Chloe).

The Benefits of Lunging a Horse