The Birthing Bond and Science Behind Equine Delivery

I remember delivering my first foal when I was around twelve or thirteen-years-old and being absolutely mesmerized by the process. Since then, I have aided in multiple equine births and find the process just as intriguing as the first time.

At the time, my mare and I were competing in local gymkhana’s and spending our evenings and early weekend mornings riding in the deserts of Phoenix. Not only was she in excellent physical condition to give birth, but she and I were also so deeply bonded. It was at this pivotal moment that I realized how interested I was in the birthing process.

The birth process for horses is just like that of a woman’s. It begins with labor, then the birth of the fetus, and finally the delivery of the afterbirth.

Mare’s typically will deliver when no one is watching and usually, they will hold off their birth until the nighttime. This is because when a mare begins to foal she is at her most vulnerable. This behavior dates back to thousands of years. Since horses are naturally a flight animal, they give birth when they are least at risk and try to get back to life as normal to keep herself and new foal safe from any predators. 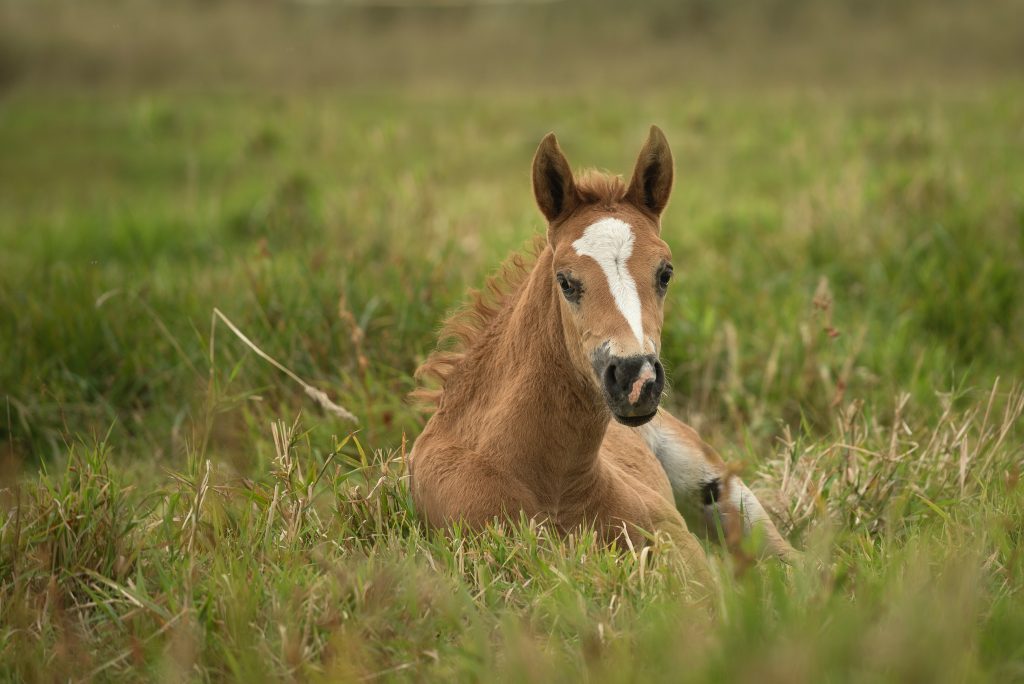 Since my mare and I shared such a deep-rooted bond, I remember sitting in her stall that was filled with shavings, on my knees, with her head in my lap. As she pushed and groaned she looked up at me with eyes that could make a young girl just imagine her pain. I consoled her by rubbing her nose and brushing her forelock out of her eyes for roughly a few hours. And finally, her foal was born. It was a sigh of relief for us both. She let me stand up and check over her new foal while she caught her breath for a minute. The sack had not yet broken so I tore open two holes around his nostrils, and he began to breathe! My mare was soon standing over her new foal and me. She bowed her head as if to say, “thank you” and began licking him.

The final stage is the passing of the afterbirth. After the foal has been born the mare will typically stand up for a few minutes, lick her new foal which will stimulate its nervous system as well as begin the initial bond (called imprinting) between mare and foal. After a few minutes of licking, she will nudge the foal to encourage it to stand. This behavior goes back to the mare needing the foal to stand quickly so they can avoid predators.

Shortly after the afterbirth is expelled from the uterus, their new life as mare and foal will begin!

I’ve always been fascinated by the birthing process no matter the species, but horses are such stoic animals that don’t often show pain so to witness such a process truly is spectacular! If you have seen or aided in an equine birth I’d love to hear your overall experience from it. Drop a message below or message me on my personal Instagram @unbridledmama.

Emily Griffin is a mama to two stunning daughters, a wife to her hunky husband, an experienced equestrian, and an Arizona native. She resides in a very small town in Southeastern, Arizona. Her days consist of raising children, everything equine, reading/ writing, and balancing the fine line between motherhood and insanity. She appreciates nature, the smell of a satisfying rain, and the lovely sunsets the Arizona deserts have to offer. Her life is unbridled in every sense of the word and she wouldn’t have it any other way! Follow her on Instagram at @unbridledmama.

Beat the Heat This Summer

Cool Summer Treats for Your Horse